Surrounded by fertile farmland, and located on a bend in the Mississippi River, Red Wing has historically been an ideal location for a riverboat port. So much so, that in 1873, Red Wing was “the largest primary wheat market in the world”. Some 146 years later, Red Wing Grain is continuing to carry on this tradition, only with corn and soybeans.

Nestled on the bank of the Mississippi River near the intersection of Levee Road and Fulton Street, Red Wing Grain serves over 1,200 farm customers in a 75-mile radius. The riverfront facility has a capacity of 2.3 million bushels (2,300 trucks) and unloads over 30,000 trucks between the months of April – November. In addition to this, the terminal loads over 500 barges a year; each barge travels to the Gulf of Mexico to export their grain to several Pacific Rim countries, South America and Africa.  The Red Wing Port Authority has a lease with Red Wing Grain to allow barge staging east of their facility on the Mississippi River.

In an ongoing effort to handle the large volume of grain coming in during the short harvest period, Red Wing Grain opened a second site in Red Wing, in the Bryan Business Park in 2010. This site houses a temporary grain bunker, with a capacity of 1 million bushels (1,000 trucks), and a permanent bin with the capacity of 1.3 million bushels (1,300 trucks).

The permit, approved by City Council in November 2018, allows for the addition of a new permanent grain bin with the capacity to hold up to 1.2 million bushels (1,200 trucks).

The Red Wing Port Authority provides an incentive program to improve the signs, awnings and facades of commercial and industrial buildings throughout the city. By enhancing their appearance, the program serves to improve the economic viability of these areas. The program is designed for permanent sign, awning and façade improvement projects that are located in approved downtown, commercial, mixed-use and industrial zoning districts of the city. Each grant, up to $2,500, requires a minimum 1:1 match. In 2018, four businesses participated in the program, including Hedin Office Commons, Backwoods Framing & Engraving, River City Car Wash, and Mike’s Barber Shop.

Businesses Supporting One Another 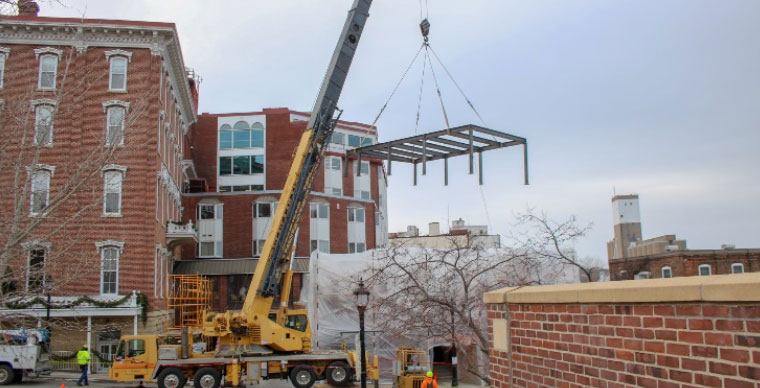 Local businesses supporting one another are part of what makes our community great. No better example of this than the St. James Hotel project. This past fall, local contractor Gadient Brothers Construction began working on remodeling and adding an addition to the St. James Veranda Patio. In early January, local contractor Neufeldt Industrial Services moved and installed a frame they fabricated to extend the floor of the Veranda. The frame was placed onto the existing parking garage ramp roof. The newly remodeled patio is expected to open in the spring of 2019.