Freight rail service in Red Wing is a very important transportation element that supports our economy and future economic growth.  The city is served by Canadian Pacific Railway (CP Rail), which continues beyond Red Wing southeasterly to Chicago and northwesterly to the Twin Cities and Canada.

First, some railroad history:  Red Wing was officially incorporated as a city in 1857.  By the 1880s, two railroad companies dominated southern Minnesota, including the Chicago, Milwaukee and St. Paul Railway with its line through Red Wing.  In 1880, the state’s population was 780,000, and the total miles of rail track was 3,151 (which grew to a high of 9,362 miles in 1930).  By 1920, railroads directly employed two million people, carried the bulk of mail, hauled 77% of all freight, and carried 98% of the traveling public.  By the 1930s, rail companies were significantly losing their passenger base due to automobiles, and they were facing nationwide declines in freight due to trucks and pipelines.

Today, the state’s population is 5.58 million with 4,634 total miles of freight rail track; CP Rail has nearly 40% of those miles.  CP Rail (shown in red below), was incorporated in 1881 and is based in Calgary; it is one of four Class I railroads in the state, including BNSF Railway, Canadian National, and Union Pacific Railroad Company.  Class I relates to those lines exceeding a certain operating revenue figure. 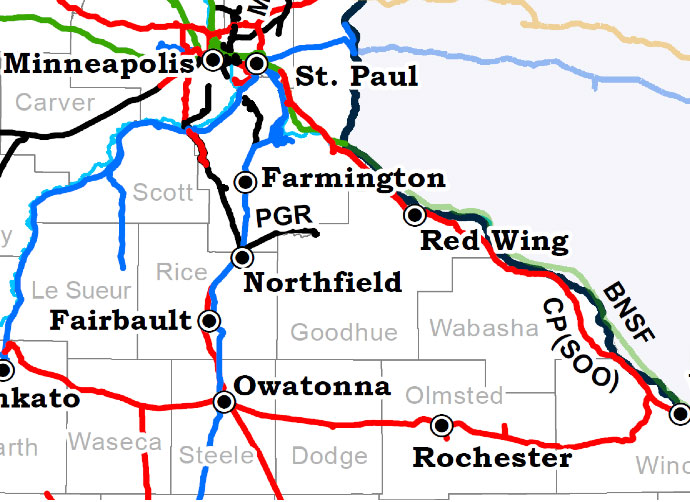 The Association of American Railroads shows that 248 million carloads of freight is carried annually in Minnesota.  Those loads predominately carry iron ore and farm products for commodities originating in the state, and iron ore and coal for those terminating in the state.  When comparing rail freight service to other modes of transportation nationally, rail moved 16% of all import and export tonnage compared to 39% by truck, 14% by pipeline, and 8% by water vessel.  In Minnesota, rail carried 38% of all freight by volume compared to 49% by truck and 6% by water vessel.

Although rail data is not specific to Red Wing, freight rail lines assists various local businesses, such as Archer Daniels Midland (ADM) with its flaxseed processing plant located along the CP Rail line.

The Red Wing Port Authority recently approved a new matching grant program for commercial building signs, awnings and facades.  For all commercial buildings/businesses in Red Wing, up to $2,500 is available for upgrades, replacements and new installations.  Design guidelines apply, which vary depending on location.  An application is required; contact the Port Authority at 651-385-3639.

Xcel’s Prairie Island Nuclear Generating Station in Red Wing provides a large portion of the city’s total market value and property taxes.  It has been in existence here since 1973 with electric generating capacity of 1,100 megawatts, including two nuclear generating reactors.

Its value has also been increasing significantly over the past five years as shown below from data provided by the League of Minnesota Cities:

Another city I previously compared Red Wing to in my blog article is Hutchinson due to its size and proximity to the Twin Cities.  Hutchinson’s total market value in 2017 was $806.9 million, which is approximately 40% of Red Wing.  However, as shown above, Red Wing has experienced significant changes in Xcel’s value through the years, which provides both challenges and opportunities in terms of a stable, ongoing tax revenue source for the city.

By February 1, 2018 the city’s Community Development Department will be located next to City Hall in the Ignite Building at 419 Bush Street.  Services will be provided (without stairs or elevator) that include:  planning, zoning, building inspection, permits, licenses, and economic development.  This building will continue to house Red Wing Ignite, and it will become the city’s new “Community Development Center”.

Happy New Year!  I look forward to a prosperous 2018 for the economy in Red Wing.