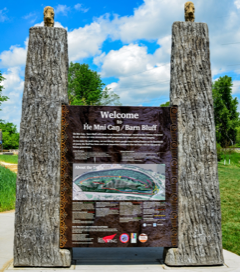 Flowing through the limestone bluffs bordering southeastern Minnesota, the Mississippi River has witnessed thousands of years of human activity. One of those bluffs rises above present-day Red Wing. Native peoples valued it as a sacred center of life and nineteenth-century settlers have looked to it for mining, recreation and tourism. Under its current name, the He Mni Can - Barn Bluff Regional Park received needed renovations such as trail restoration and a new Welcome Plaza as part of a comprehensive plan. But more than just physical improvements, the project was about building a better community.

The current park was designated in 1910, but its history dates back long before. The Native American Mdewakanton Dakota called the bluff He Mni Can, meaning “Hill, Water, Wood,” as a spiritual, central location to their way of life.

“Barn Bluff'' came from the English translation of the French term Mont La Grange, whose explorers thought the bluff looked like a barn from the river. After decades of limestone excavation ending in the early twentieth century, the bluff was designated Barn Bluff Park in 1910.

The City of Red Wing and Prairie Island Indian Community worked together to form a He Mni Can - Bluff Barn Regional Park Master Plan in 2016 that would better represent the park for all people. The first phase of the plan was completed this fall, with a budget of approximately $1.8 million. The He Mni Can - Barn Bluff Project was one of 13 projects recommended by the Greater Minnesota Regional Parks and Trails Commission in 2018 and funded from the 2019 State Agency Appropriations Bill. The Commission provided $1,137,433 in funding for Phase I via Minnesota’s Legacy Park grant, the City of Red Wing, the Evelyn Sweasy Charitable Trust Foundation and Prairie Island Nuclear Generating Plant.

The park project began with the City of Red Wing and the Prairie Island Indian Community coming together to resolve a matter of graffiti occurring on the bluff. That evolved into the Master Plan, with trail improvements for park users while respecting the land’s vitality for the Native Americans. Pre-existing trail sections crisscrossing the bluff were either repaired or rerouted, with several new trail segments constructed, all designed to avoid cultural resources and prevent erosion. Archaeological experts were consulted to ensure trails did not cross several burial mounds. Hundreds of water bars were installed to limit trail erosion.

A new Welcome Plaza was designed at the entrance, including descriptive interpretation elements, such as a medicine wheel and textile patterns, to tell the story of the bluff while reflecting the local Dakota heritage as it relates to all members of the Red Wing community.
Additionally, the park itself had been difficult for visitors to access. The entrance itself received several upgrades, including a new parking lot, street improvements, sidewalk and pedestrian and bike path upgrades.

“As a result of local highway and bridge construction projects in the 1950s, access to the bluff was cut off from local neighborhoods and the Red Wing downtown area,” said Steve Kohn, Planning Manager with the Community Development Department of the City of Red Wing. “The entrance was somewhat of a band-aid and the trails were a combination of those dating back thousands of years to others developed more recently.”

“The plan was to make it a regional park with better trails that respected the cultural history,” he said. “I believe that was accomplished and kept the experience as natural as possible, allowing all visitors to experience the beautiful vistas the bluff affords.”

The City of Red Wing and the Prairie Island Indian Community enjoyed a great partnership working together on the project, said Kohn.

“I believe everyone is extremely happy with how the improvements pay tribute to the Dakota history and we look forward to the future projects at the park,” he said.

Several ideas exist for continuing the Park’s improvements. In the short term, a ribbon-cutting ceremony is planned for the spring and a historian will update the location's listing with the National Register of Historic Places. A second phase is in the works to improve the trail from the new Welcome Plaza to the 1882 G.A. Carlson Lime Kiln located on the river-side of the bluff, including site interpretation materials. The third phase of the project would focus on a visitor center with restrooms. Longer term, the City’s Riverfront Trail is planned to be extended to He Mni Can - Barn Bluff from Levee Park, just upstream from the bluff under Highway 63, as well as Red Wing access points to the Goodhue Pioneer State Trail and Cannon Valley Trail. Another segment of the trail would connect the bluff downstream to Colvill Park.

A Renewed Focus on Workforce Diversity

Adapting to a New Workplace Ecosystem

Immigration Tips for International Business Travelers During the Pandemic

The Effects of the Pandemic on Industrial Design