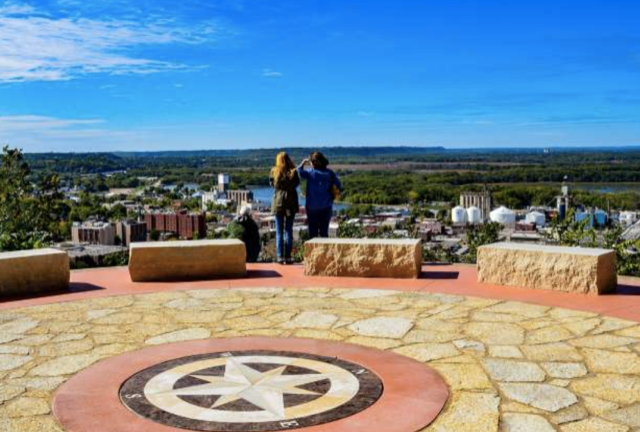 Red Wing is putting the finishing touches on upgrades to Memorial Park Overlook, continuing a long history of celebrating the history and natural spaces of the area. Residents and visitors alike can now enjoy the improved viewing and parking to enjoy the panoramic views of the Minnesota River Valley.

A project to replace the Memorial Park overlook on Sorin’s Bluff was completed this fall with a design led by public input to separate vehicles from pedestrians at the overlook and retain the excellent views afforded there. The project budget of $335,000 was approved by the Red Wing City Council in 2020. Resident Bob Behrens and the Noontime Kiwanis Club were able to raise and donate $147,500 toward the project as the organization’s 100th Anniversary Community Service Project.

“This project, and all the upgrades on Sorin’s Bluff over the years, have been completed extremely well, making that whole area very beautiful,” said Dan Rogness, Special Projects Manager with the City of Red Wing. “This final touch increases the viewing experience for residents and offers more potential to draw people to Red Wing.”

Viewing from the overlook was redesigned with safety and accessibility in mind. It features a circular viewing area with multiple seating and standing options, including amphitheater-style seating around a circular observation deck, all predominantly constructed with area limestone. A separate, but connected circular area was added for a flag pole with the U.S. flag and armed service medallions. A defined parking area separate from the viewing area was constructed as well. The overlook replacement was the last step to upgrading the area, following several other projects, including increased signage, mountain bike trail and disc golf area improvements.

“The former space was just a big area with no detailed parking areas, so folks would park everywhere and it was a bit of a mix of pedestrians and cars,” said Rogness. “The work done by all the volunteers and organizations over the years says a lot about the Red Wing community.”

One step in history

The Memorial Park overlook redesign was really just one step of community investment in preserving and honoring its history. A complete history can be found on the city of Red Wing’s website. At the end of the nineteenth century, Red Wing was known as “Minnesota’s Lime Center,” largely due to kilns operated on Barn Bluff (now He Mni Can - Barn Bluff) and 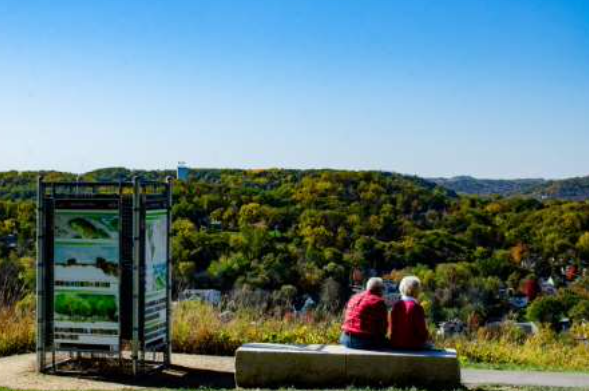 Sorin’s Bluff. Around the turn of the century, demand for lime fell in favor of other products and quarrying ended around 1910. As years passed, groups like Red Wing’s Women’s Community Association and Soldiers Memorial Association led the effort to turn Sorin’s Bluff into a retreat dedicated to soldiers of all wars. In 1929, Red Wing dedicated Memorial Park on Sorin’s Bluff, as a symbol of Red Wing’s pride and dedication to its natural spaces. Over the years, while still beloved by citizens, the park became in need of revitalization.

From 2010 to the present, Red Wing has sought to revitalize the park. Red Wing Area Mountain Bikers Organization (RAMBO) cleared trails along the eastern side of the bluff, a disc golf course was created and a community volunteer effort worked to make Memorial Park a gathering space again. Groups like Live Healthy Red Wing worked to energize the community, while the City of Red Wing has worked closely with the Minnesota DNR to increase preservation.

Jan 4 2022
We present to you the Best Economic Development Resources for 2022. Each year, backed by research, conferences, and the latest trends, the Golden Shovel Agency team puts together a list of what we consider to be the best economic development resources. BEST ECONOMIC DEVELOPMENT RESOURCES Take some time to appreciate these bes...Continue Reading

Jan 4 2022
We present to you the Best Economic Development Videos for 2022. Each year, backed by research, trends, and videography expertise, the Golden Shovel Agency team puts together a list of what we consider to be the most impactful economic development videos. BEST ECONOMIC DEVELOPMENT VIDEOS FOR 2022 Take some time to appreciat...Continue Reading

Jan 4 2022
We present to you the Best Economic Development Websites for 2022. Each year, backed by research, conferences, and the latest trends, the Golden Shovel Agency team puts together a list of what we consider to be the best economic development websites. This is always difficult, as there are many deservin...Continue Reading